At the 7 km2 archaeological site in Sanxingdui, the excavation of sacrificial pits is underway, where a joint team of archaeologists from the Institute for theSichuan Provincial Cultural Relics and Archaeology, Beijing and Sichuan Universities have uncovered nearly 13,000 amazing objects made of bronze, gold, jade and ivory. Many of the artefacts have no analogue in archaeology and are quite unique.

The vast majority of the objects were deliberately broken - they bear the marks of being struck and burned before being deposited. Over the past year, archaeologists have found 3,155 relics that were in relatively good condition, including more than 2,000 bronze artifacts and statues. The findings shed new light on the Sanxingdui kingdom, from whose era there are no written records or human remains.

Significant and often unprecedented treasures have been found here - last year alone, for example. At least ten objects from the latest excavations are quite unique in archaeology. These include a bronze altar nearly a metre high, which was probably used for ritual offerings to heaven, earth and ancestors. Traces of bamboo, reeds, soybeans, cattle and wild boar remains around the site confirm these offerings.

Four of the sacrificial pits (3, 4, 7 and 8) have been convincingly dated to the late Shang dynasty (1600 - 1046 BC). Analysis of 14,200 samples taken from the pits defined a tight time range for the period of deposition between 1131 BC and 1012 BC. Pits 5 and 6 are older, but still from the late Shang dynasty. The excavation of pit 7 is almost complete. The excavation of pit 8 is about halfway through. The most recent finds come from these two pits.

Last weekend, a beautifully crafted bronze altar was unearthed from pit 8.It is about a metre high and consists of a platform with openwork decoration and an upper section decorated with bronze mythical creatures. The two parts were discovered separately. The upper part was found on Saturday 11 June and the platform was discovered the following day.

A 1.5 m long bronze sculpture was also lying in the same pit It was cast from three parts that were subsequently welded together. In the centre is an anthropomorphic head with bulging eyes and tusks on a serpentine body, a typical depiction for the Shu culture. The figure is positioned head down, the raised hands holding the lower part: a wine vessel (lei) in the shape of an urn on a square base. At the top is a zun, a pipe-shaped drinking vessel painted in vermilion. The complex iconography testifies to a mythological world full of figures and images.

Another unique object was discovered in pit 7: a bronze box in the shape of a tortoise shell with green jade. The box is decorated with handles in the shape of dragon heads and bronze ribbons. An analysis revealed that it was originally wrapped in silk. Most of the objects from pit 7 are smaller pieces, but of no less quality. One of the artefacts was a folded sheet of bronze literally as thin as paper - the same thickness as a standard sheet of A4 paper today.

Ancient Chinese founders commonly cast using two opposing moulds, so most of the Sanxingdui bronzes were quite thick. However, folded bronze paper cannot be produced by this method. Archaeologists will need to conduct a metallurgical analysis of it (and other fragments of thin bronze found in pit 7) to determine how it was made.

Once the work is complete, the archaeological team plans to make copies of the objects and experiment with different ways of destroying them to learn how the ancient people of the Shu culture ritually sacrificed them 3,100 years ago. The rich site of Sanxingdui is on UNESCO's "tentative list" of world heritage sites. 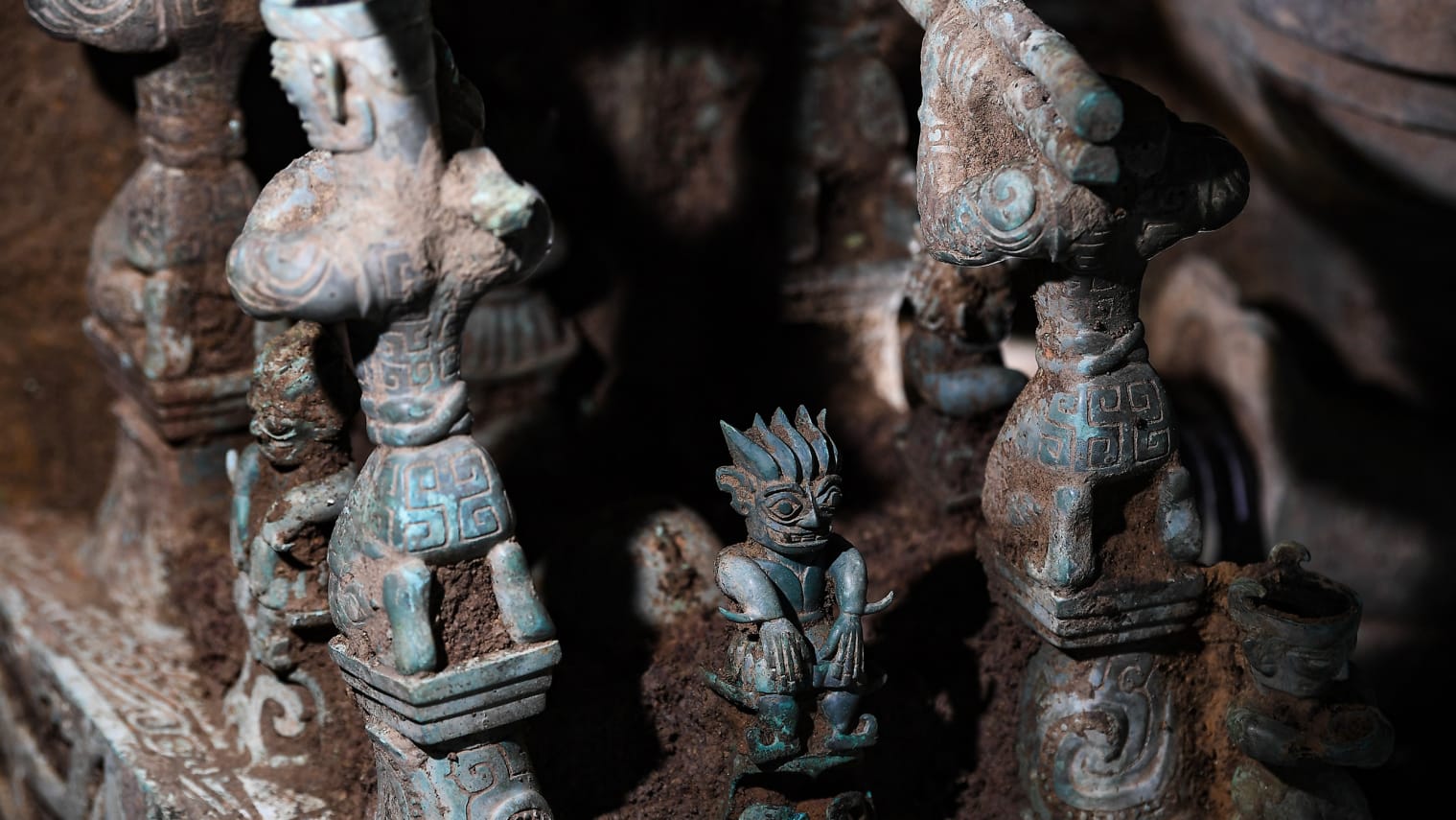