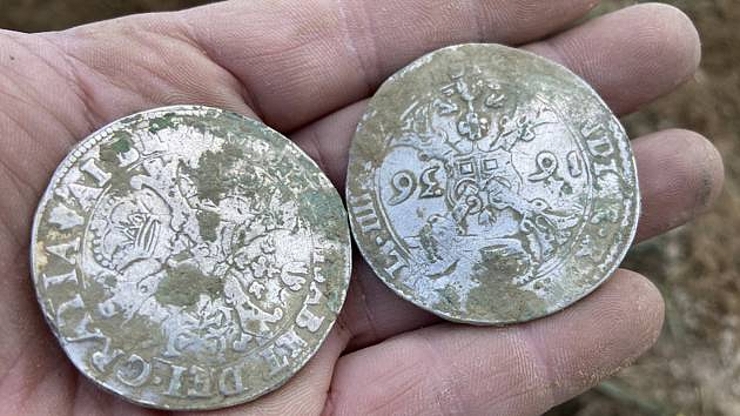 Two years ago, an unknown finder picked up coins in a meadow near Vysoké near Jevíček. He summoned archaeologists to the site, who thoroughly searched the soil. The depot eventually contained over 7,000 coins from the 16th and 17th centuries.

It is clear that this is a completely unique treasure, which is unprecedented in the Czech Republic in recent years. The unknown finder first collected around 200 coins in the meadow. When archaeologists from the Regional Museum in Litomyšl arrived at the site, they launched an extensive search operation, in which they traced over seven thousand coins in total.

They date back to the 16th and 17th centuries. Most of them are silver coins, and a smaller number are gold coins. In terms of area, from a large territory from Venice to Lithuania, from the Netherlands to Transylvania. The coins were traced thanks to the co-workers of the Regional Museum in Litomyšl, who arrived at the site with metal detectors.

In any case, this is one of the largest coin hoards found in the Czech Republic. Its cultural and historical value is in the millions of crowns. Such coins could buy 25 draft horses, 70 cows, 280 sheep or 1,500 geese.

Experts have not been able to find out who hid the coins. They think the owner may have been a trader looking for a secluded spot. At the time, the site was a pasture or forest. Archaeologists think that the first part of the fortune could have been buried at Vysoká in 1669 or 1670. He may have kept another part of the small coins for future use, but eventually decided to bury the rest in 1671 or 1672.

When word of the treasure got out, four people tried to steal it. Archaeologists had a problem with looter raids.

"We arrived at the site, there were foreign detectorists, we threw them out, we called the police. We chased them around the forest. Even though there was police tape, they were climbing while our guys were working there. At times it looked like we were going to get a mouthful," Němcová recalled.