30.4.2012 Archaeologists pulled hundreds of finds from the mud 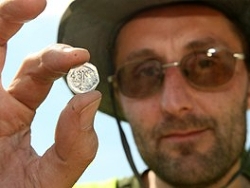 Archaeologists were very pleased with the findings in the Old Town Pond in Telč. Hundreds of objects, including coins, were pulled out of the mud. In the past, there were roads leading through the pond's bottom, and people used to lose not only coins but also rings.

The bottom of the Staroměstský Pond was excavated in 2011. It was clear from the beginning that this was a very interesting site from an archaeological point of view. The reconstruction of the pond was therefore carried out under the supervision of archaeologists. They hoped to find evidence of the medieval settlement of Telč.

"We had already planned the reconstruction three years ago, when the sewage collector for the Old Town Pond was being built. However, we did not receive a subsidy then, so the work had to be postponed until today," said Roman Fabeš, the mayor of Telč at the time.

And the work really pleased the archaeologists, who had a real harvest. In 2012, they reported that they had uncovered the oldest history of the town, and in addition, they found the routes of three ancient roads. Hundreds of finds were recovered from the bottom of the pond. In addition to coins, for example, a 900-year-old horse skeleton.

The findings are explained by the fact that three stone roads once led through the area and a village stood on the site of the pond in the twelfth century. "It must have been quite a rumble on them. On the other hand, that's good for us archaeologists, because people were losing many objects and horses were losing their shoes," commented David Zimola, an archaeologist at the Museum of the Highlands in Jihlava.

Archaeologists have recovered more than eight hundred finds. In addition to several dozen rings, they included horseshoes, pottery and coins. The oldest one is a denarius of Béla III. It is the oldest dime of Hungary from the seventies of the twelfth century. Most of the coins date back to the thirteenth century and are mostly Austrian coins. This is to be expected, as Telč was greatly influenced by the Danube region.

It is also interesting to note that four rare coins lay on top of each other. Apparently they were stored in one bag.
"It is very likely that they were lost by the 1920s of the thirteenth century, a time when Jihlava, for example, did not exist at all," Zimola said.

There were also several skeletons in the mud, they were animal skeletons. The archaeologists also found ace-shaped earrings, weights, horsetail or a glazed hand, which was probably part of a drinking or pouring vessel.