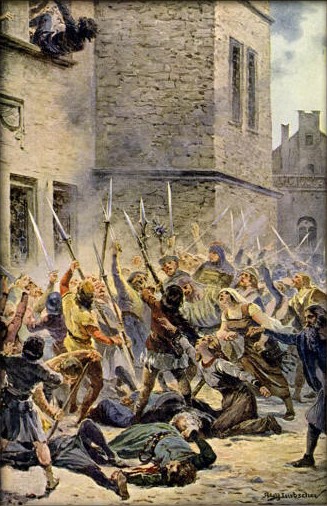 The defenestration of the anti-Hussite constables in Prague's New Town simply returned the whole of Prague into Hussite hands and gave the king to understand that the Hussites would not retreat. It began on July 30, 1419.

People shouted over each other to break down the gates. Jan Želivský kept encouraging the invaders, saying, "Do not be afraid, children of God! Under the onslaught of the beams brought from the enemy building, the gates burst open and everyone rushed up the staircase of the New Town Hall. At the last moment, the councillors block the door of the meeting hall with a bench, but it is of no use to them.

This is how the Hussite Revolution began on 30 July 1419, according to Jan Bauer, who wrote the book The Revolutionary Events of Czech History. "In a short time, the conseilers and the purkmister Jan Podivínský were caught and thrown out of the windows on set spears and barrels. Those who survived the fall were brutally conquered on the spot," Bauer describes the events of the time.

The historian Petr Čornej described the events in Prague's New Town as a carefully prepared coup. "The fact that the victims were left with their valuables, which they had with them at the time, testifies to the preparedness and perfect direction of the coup," Čornej wrote.

Not even a shadow of suspicion of bad intentions was allowed to cling to the violent deaths of the enemies of the Hussite interpretation of the word of divine law. But what radicalized the Czech public enough to take up arms and stand under the banner of the chalice emblem four years after the burning of Jan Hus in Constance? "After all, four years is a long time and the initial bitterness and anger must have worn off to some extent," Bauer writes in his book.

In Bohemia at that time, there was a de facto disintegration of royal power. King Wenceslas IV, already completely overcome by alcoholism, resigned himself to ruling the country and only by occasional tantrums did he show that he was still the monarch. "The tired, disgusted king did not seem to notice what was happening in his country at that time. All he wanted was undisturbed peace and a permanent residence in his favourite castles and the forests that surrounded them," wrote historian Jiří Spěváček.

The defenestration of the anti-Hussite constables in Prague's New Town simply returned the whole of Prague to Hussite hands and gave the king to understand that the Hussites would not retreat. The subsequent early demise of Wenceslas IV was the final straw that pulled down the revolutionary avalanche. The events of 1414 to 1419 and the fact that Hussite politicians made the accession of Sigismund of Luxembourg to the Czech throne conditional on respect for the principles of theThe immediate reasons for the outbreak of the Hussite revolution lay in the political and ecclesiastical-religious spheres.