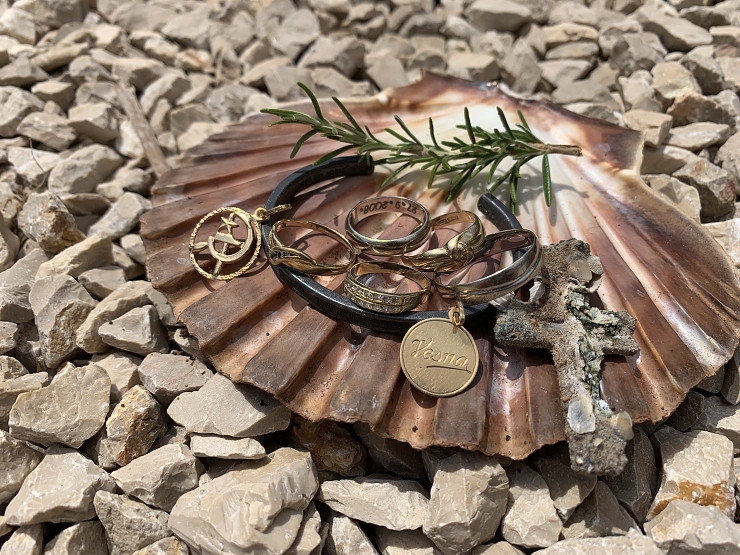 When I started these holiday articles, I made it a point to do a report every year for us Central Europeans about how to find the sea.
Unfortunately, the past two seasons have not been entirely happy ones for tourism, and on top of that I had two daughters, so the chances of going somewhere without being banned by the state or your wife were slim.
This year, however, I made a vow and told myself that I would definitely not let the sea deprive me this year and I would return in full force and equipment to where I left off in 2019...

So I immediately started collecting points at my wife's and sticking in a coupon card with Croatia 2022 written on it, I had to chop Latin for a month or so to fill the coupon card as fast as possible :D (for this reason I didn't add much finds to my FB group last month : D).

Anyway, after some time, with more effort, I finally managed to get the coupon card all glued up and so I went to my wife to claim my discount :D.

It was a classic car ride, because I went before the season and the roads were completely empty in the evening, the only thing that spoiled the joy of the trip was the high price of petrol and the overpriced toll on the Croatian highway. In general, lately it seems to me that Croatians are stretching everything to the limit and Croatia is becoming more expensive than Italy.

For example, in a classic restaurant the food is under 100Kun, seafood around 120-140Kun.Karlovac/Ozujsko 20-25Kun.

When I finally arrived at the place, after almost 14-15 hours of travel, I unpacked and, considerably broken after the journey, made my way to the sea. The first white gold snook hit me as about the 5th week signal after a couple of marten, as soon as I got in the water basically less than 200m from my accommodation, so a good start right from the start :D.

I lasted in the water for about another hour, but had quite a few more along the way, so happy with my first snook I set out to wash it down with a few Karlova and make up for the sleep deficit.
Anyway, the very next morning I was at the sea markers at about 8am, here it's good to take advantage of the low tide in the morning, the level is a bit lower and you can get to more depth.
Unfortunately, the very 2nd morning after 2 years of heavy use, the wooden handle from the sieve broke, so I spent the whole morning trying to dig out the rest of the handle, by all means.
Luckily, we managed to catch a local handyman who drilled the broken piece of the handle for 4 Karlovačka, I quickly put the sieve back together and hurray to the sea.

After a while, another gold fell again - quite a nice ring with two rows of good clear stones - here I have to ask:D.
The next few days were more or less in the same vein and no matter where I went I always had at least one gold for my prospecting. The weakest day was probably the day when only the Robert/Vesna engraved pendant fell.
The best day was the day when 3 gold rings fell in the space of about 2 hours (total of a large wedding ring + 2pcs of ladies rings).

The last gold fell a pendant in a slightly unconventional version of the famous hammer and sickle emblem, here I'm thinking a bit what I'm going to do with it....
Anyway, apart from the pendant with the communist emblem, all the gold I found is in the classic 14Kar purity, bolshThe Evian pendant is known by sight to be better than 14K, I would even type it as more than 18Kar. (the markings are there, but unknown and illegible to me), but I'm in the Czech Republic for a few days so I haven't had a chance to have it checked yet. Anyway, whoever voluntarily wore it must have been a really avid fan of the regime, so I'm not sorry for its loss... 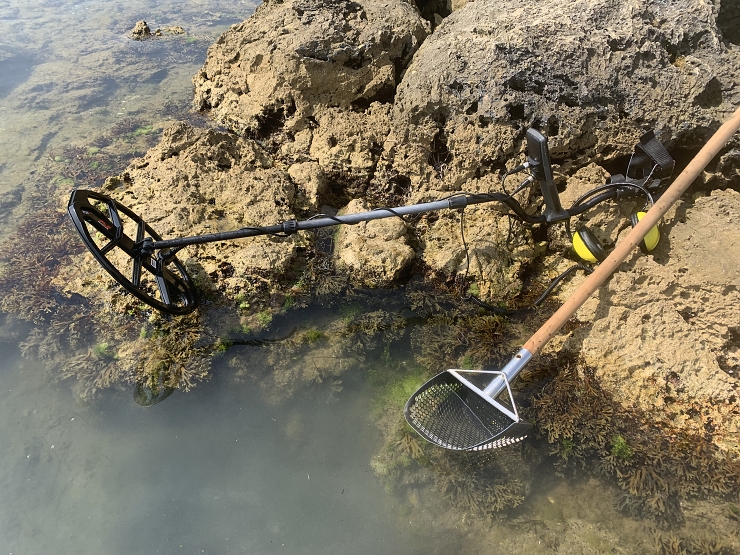 The fattest piece was given by a colleague -18 Carat solid wedding ring- the scale in the local Lidl showed 10g without the microtene bag :D

This time I was glad to get away from the Czech Republic and family for a long time, so I opted for a more relaxed setting rather than some sharper which could maybe be a bit more sensitive, but might not be that stable, so I opted for a calm setting, mainly to make it comfortable to use... 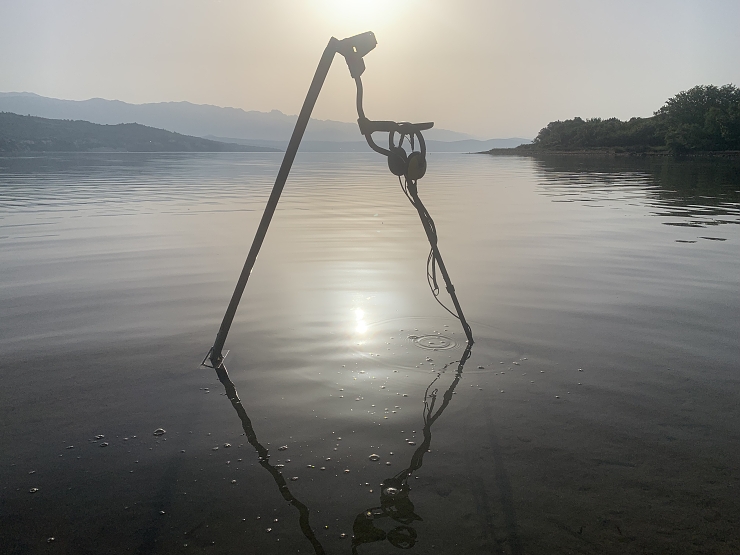 More or less necessary are Minelab yellow underwater headphones at sea is unfortunately not as calm as in our country and stronger waves will very easily pull your headphones into the water.
I also alternated between the classic 11 and Minelab 15 probe quite often, generally the places where the level drops very slowly are quite clear and you go quietly 100, 150m before you hit the signal.
This is due to the fact that people spread out a lot more in an area where you can go 150m from the shore and still have water depths of about chest deep.

For this reason, it is advantageous to increase the range of your detector by using a larger 15 inch probe, you increase the chances of hitting a signal quite a bit. The target is a little harder to track , because the big one has a much larger range than the origo 11, but after some practice I was pulling targets on the 1st pick up with it. 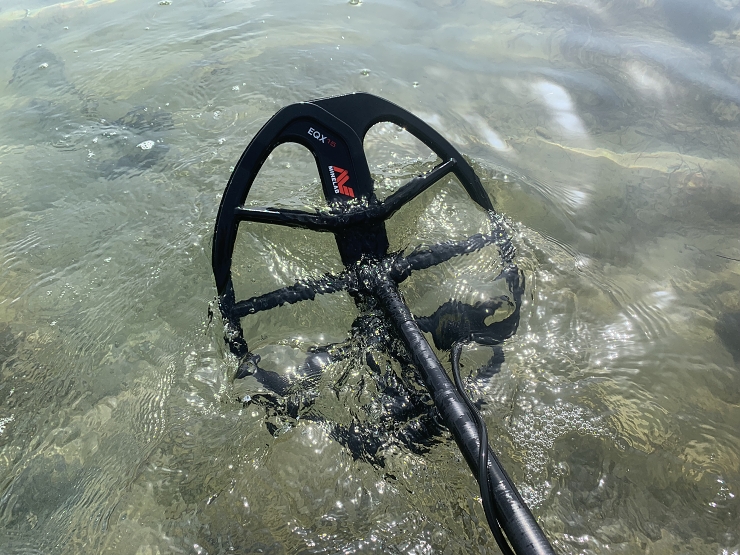 I used the classic 11 probe again in places where people were much more concentrated, for example because the water went to depth much faster and they couldn't disperse 150m from the shore.
And then of course the sieve, I use the bigger sieve here from LP and I have to say it's unreal what it's seen, I've had it since 2018, used really intensive sand/stones and it still holds up without any cracks in the weld or material - before that I usually trampled all the sieves in one season...
I've had the tracker with me too but personally don't use it in water - beware of tracker behavior in salt water- see links at the end of the article.

If you haven't tried searching in the sea before and don't have that much experience, it can happen quite easily that you catch a target, remove it with a sieve and there is nothing in the sieve that resembles anything metallic.
You rake through the picked up pebbles in the sieve (which are logically on the rocky Croatian beachesch) and you see nothing, you check the dug hole and nothing, you wonder where such a strong
signal could have been lost...
The paradox is that you actually had the target in the sieve all the time, only it just looks like a rock, which you have a sieve full of and the target is perfectly masked...
If a target has been in the sea for a long time, nature will deal with it just like shipwrecks and corrosion
the environment around the target will cause grains of sand, shell debris and so on to build up. until it reaches the point where the target is one big glued-together ball that looks remarkably like a rock.
Breaking such kinder eggs is then fun for the evening after the search, because you never know what is hiding in the middle :D...

Just like the previous years I would say that this year was a success. This time I was only at the sea for 6 days compared to the last Croatia for which I got an exit clause at home :D out of which I searched for less than 5 (before I was on 10) so converted to days the result was quite similar to 2019.

In total I got 2pcs of white gold wedding rings, 3pcs of ladies rings and 2pcs of pendants - unfortunately I couldn't find the chains (quite possibly they weren't even there).
Of the coins approx. 150-200 Kun, which I gradually returned to circulation - from 1.1.2023 the Euro will be valid in Croatia so in about 1/2 year they will probably not be exchangeable in the Czech Republic. So I would probably recommend spending all the kuna you have left or exchange them back as soon as possible after your holiday because in October there will probably not be much demand for them. So I'm pretty happy this year :D 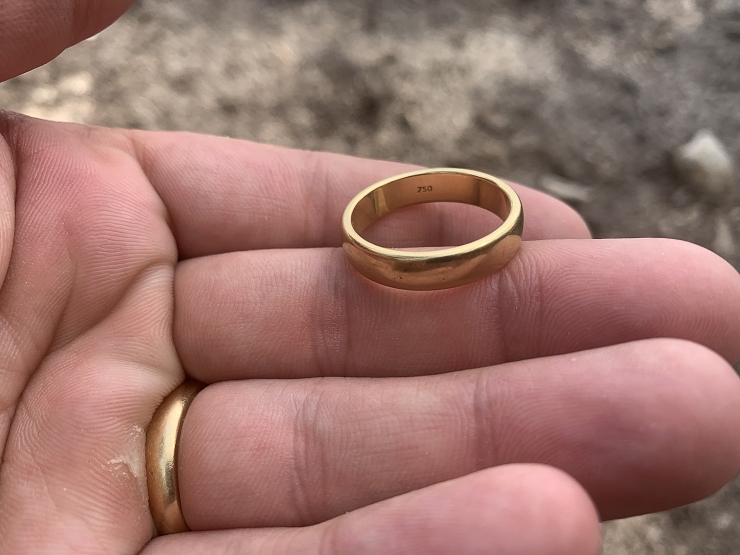 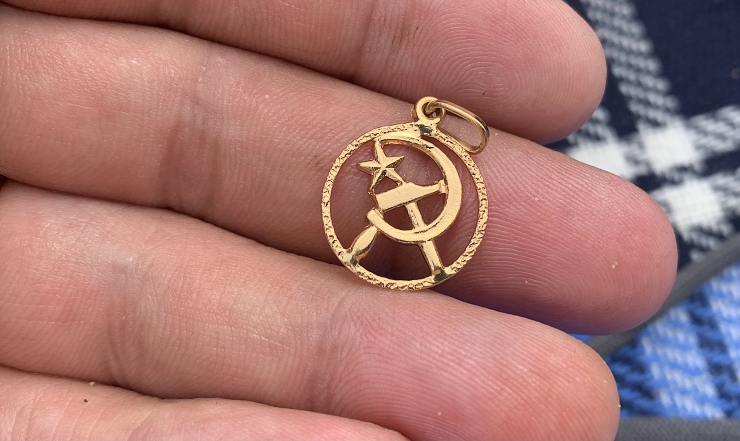 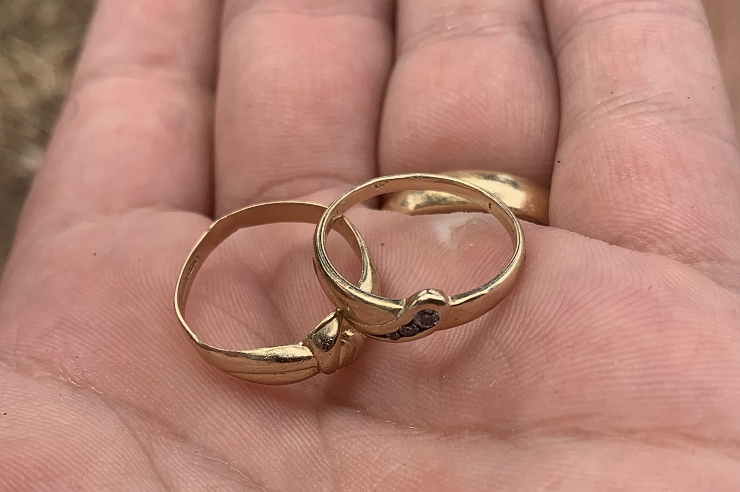 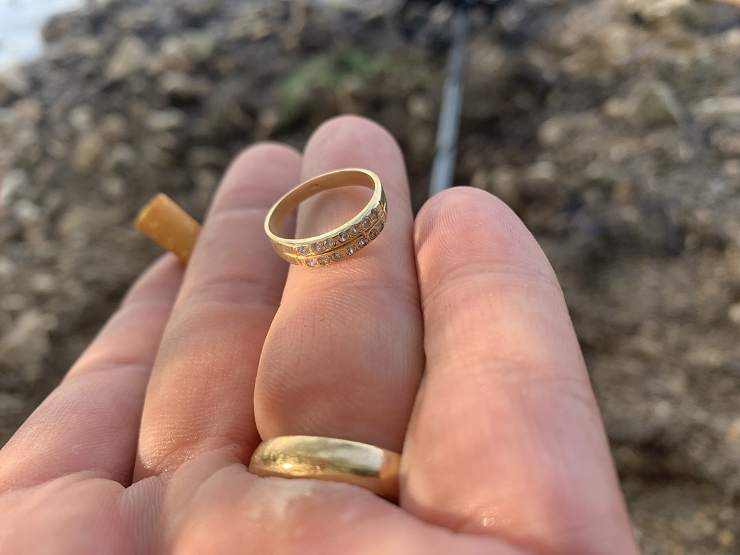 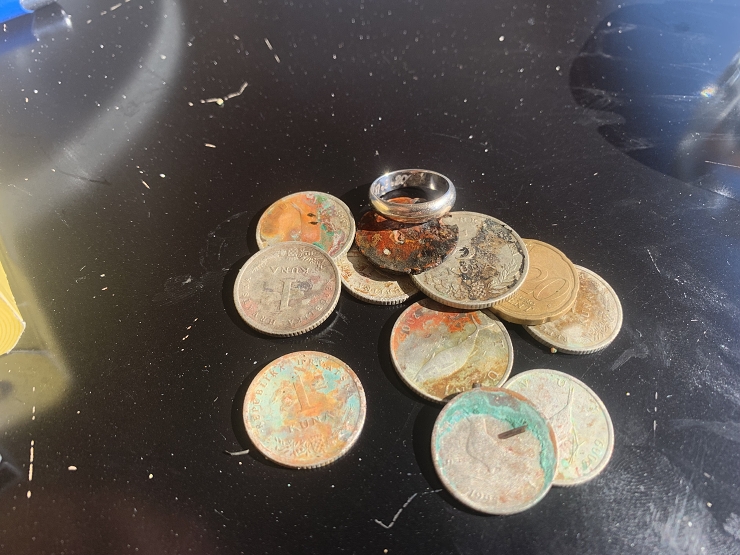