Handlebar grips - how it all began

Categories: Finds and rescue research in the Czech Republic

In the beginning, God created the heavens and the earth .... and later caused the handle of a pencil sharpener to be lost in an unnamed forest.

The ornamental zoomorphic (animal-themed) handle of the pencil sharpener is one of the artifacts that every searcher seems to have on his or her imaginary list of desirable finds. Hundreds of you have already made this find and so it's checked off your list. Given how many types and variations of them there are, though, many of you still have the handle on your list, just with a specification of what pet you're still missing.

When I started searching 16 years ago, I couldn't help but notice the sculpture of the animal on the cradle as well, as it would occasionally appear on a widely visited detectorist site. And I put it on my imaginary list, too. It didn't take long, I guess less than two years, and I found a whole hawk with a beautiful smooth patina in the foothills of the Ore Mountains (see picture). I was very happy about it, mainly because of the condition of the find, because at that time it had preserved the whole ocellus, although totally corroded. I tried at that time to save the blade at least a little and after drying it, I filled it with melted wax, but it still did not help and as you can see in the photos, the blade started to disintegrate over time, so that about 1/3 of it was left.

As I still really liked the handles and realistically assessed that the chances of finding other motifs were slim, I decided to collect them through swaps with other colleagues and purchases. As it happened, the animals started to increase (at the peak of my collection I had about 130 pieces). It should be noted that I later found an even larger half of another dog.

Shortly after this decision, during a casual visit to the Teplice archaeologists, I discussed my new interest with Luboš Rypka (currently working at the museum in UnL). He prompted me at the time that not much was known about this artifact and that due to its finds in various archaeological contexts, they were sorted from the rareRoman period, to the medieval and modern periods, so it would be a good idea for me to do some research and crack this age-old riddle. I like a challenge, so I took on the task.

I've studied the available literature on the archaeological finds of these handles, and at the same time on various search forumsI put out a call for searchers to send me their finds of the handles of the spears, along with the circumstances and metrology. And surprisingly, colleagues responded to the call and started sending me their finds, and in most cases they had no problem sharing the finding circumstances. Thanks to this great cooperation, it was possible to document a total of over 550 decorative handle sharpeners. It should be noted that at that time only about 20 pieces were archaeologically documented and published in the whole of Europe!

I extended the documentation of the handles to other European countries, so I subscribed to 27 foreign detectorist discussion sites at that time. Thanks to this action, it was possible to eliminate the foreign production of these artifacts and especially the myth amongst searchers at the time that they were everyday objects of the French Napoleonic soldiers. Surprisingly, the French did not know the handles.

I don't want to bore the reader with a long story, so I'll keep it short. My research took place between 2008 and 2011, when I published a study on handles in the journal Archeologive in Central Bohemia. There were only 343 finds described at that time. I devoted myself to this topic for another year, during which time I added the remaining 200 finds, which I have written down in a PC, but I never published them because I did not feel the demand.

If anyone is interested in more information about the progress of the research, post it in the comments :)

The study is freely downloadable in PDF format here: https://www.academia.edu/16912025 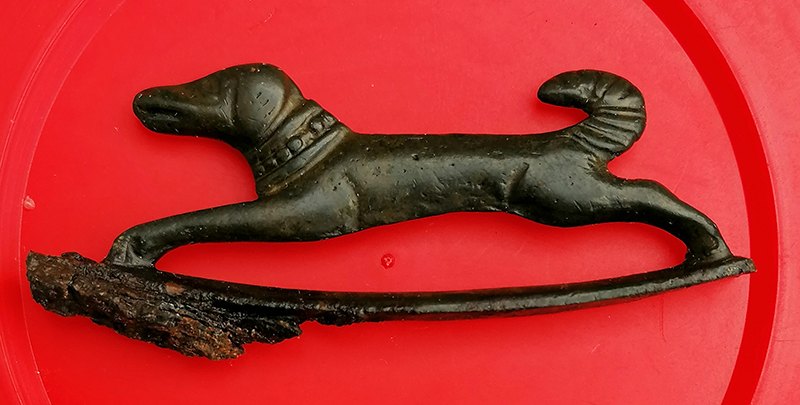 The handle of the pencil sharpener that triggered my interest in them.

The handle of the pencil sharpener that triggered my interest in them.