The story of the watch

Categories: Finds and rescue research in the Czech Republic

It was 18.12.2015 pre-Christmas time on the mud and I was the only one who was happy that there was no snow. All week I was looking forward to going on another adventurous expedition with the detector. My destination was the area around the Slatinka stream, located in the forest near the spa village of Slatinice. Because of its beauty and scenic beauty, there is also a nature trail leading through it to the top of Kosíř, which is a kind of Mont Blanc for us Hanaks. I was also attracted by something else, the smell of ancient times and the mystery that I feel every time I walk through it. I think it's a certain gift, or a special sensitivity, that when you carry a particular place in your mindhundred, life's findings fall into place, and even though I didn't feel anything like that today, I found something with a powerful story behind it. A story that I'm happy to share with you.

I parked my car at the spa and walked to the Mánes Nature Trail, which is bordered by the aforementioned Slatinka stream. At first the trail goes through a kind of terrain furrow and I didn't want to climb up its slopes. I chose a place where the landscape opens up a bit more and the forest is more accessible. I tune the detector and off we go. After an hour of searching, nothing much, just one sock and a mess of tourists. I'm passing a place that few people know about. It's a sort of unpaved cellar in the hillside by the stream, which the locals say was used as a makeshift shelter from air raids during World War II. The creek led me to a patch of mature, ancient trees, and I knew that one of them, located across the water, was hiding a cache in the form of an army crate and in it were lots of empty shell casings, along with a change box and a notebook. The crate formed the boundary of a very sad place.

On this spot is a memorial to the victims of the air crash of an Army Mi-24 helicopter that crashed here in November 1998 while returning from an air day in Ireland. 4 military airmen from the helicopter base Přerov - Bochor died here. At the crash site there is a granite memorial with a gold inscription, photographs, names of the victims and some of the debris found. The probable cause of the crash was a technical malfunction of the gyroscope.

I knew about this place and also that there was no point in even turning on the detector around here, because the hundreds of aluminum pellets scattered by the explosion would deter anyone passing by with a detector. Just out of inertia, I was unconsciously waving the detector with the intention of walking the edge of this place as quickly as possible, when after an unusually long time without a signal, I spotted one just two metres from the road. I thought to myself, it's only a short distance from the road, maybe it won't be just one of the shards again, but something interesting. I curiously brush away the leaves and a watch peeks out at me from the surface. What a watch, without a strap, but cool, I think to myself. The watch had the back cover up and there were some numbers on it. I pick it up and I want to see the side of the dial. There was nothing where the glass is supposed to be, but something else caught my eye, I see the Air Force emblem under the Prim watch mark and the dial. Suddenly it dawned on me what I was holding. For a while I just sit and replay the story of this place, the place where the lives of 4 army Mi-24 helicopter pilots were lost and I am holding the watch of one of them.

At that moment I had no desire to look further, but I thought about how I would dispose of the watch. I decided to give the watch to the wife of the pilot to whom it belonged. At home, I started a search and cast my nets. I had one direct and one indirect lead. The first was the watch's ID number, which referred to a specific person, but how to find it? The second was the information that there was a commemoration every year at the same place and time, which was already passé. My next steps were prompted by a chance encounter when I showed the watch to my sister. She told me that a former helicopter squadron commander from Bochora came to the butcher's shop where she worked to shop. Word got around and I gave him the proper information, including the watch's ID number. Even though I was curious, I didn't insist on feedback because I don't like to bother anyone. And so it happened that almost a year and a half passed and I almost forgot about the watch in the daily rush of worries. One day I received an email, which I will quote here.

Hello, I have information from Colonel v.z X.Y. about the watch you found at the Mi-24/35 crash site in Slatinice, I suppose it was in 22. No one has contacted you so far, so I am trying to make amends now. I would like to know under what conditions (if you still have them) we could make a handover and takeover. Thank you for your reply. Sincerely, Maj. Ing. Y.X Chief of Staff, 221 Helicopter Squadron.

After this email we arranged a meeting and I handed over the watch. I also learned why it took so long. One of the things was that the whole squadron had moved from Bochora to Namesti nad Oslavou and some documents, including information in which the watch ID number was assigned to a specific person, had been shredded. The watch is now in the museum of the base in Náměšt' nad Oslavou and is a silent witness of the history of the Tiger Squadron, as it was called. And that is the end of my story about the watch.

For those who want to know more about this crash with period photos I give the link: http://www.leteckabadatelna.cz/havarie-a-sestrely/detail/692/ 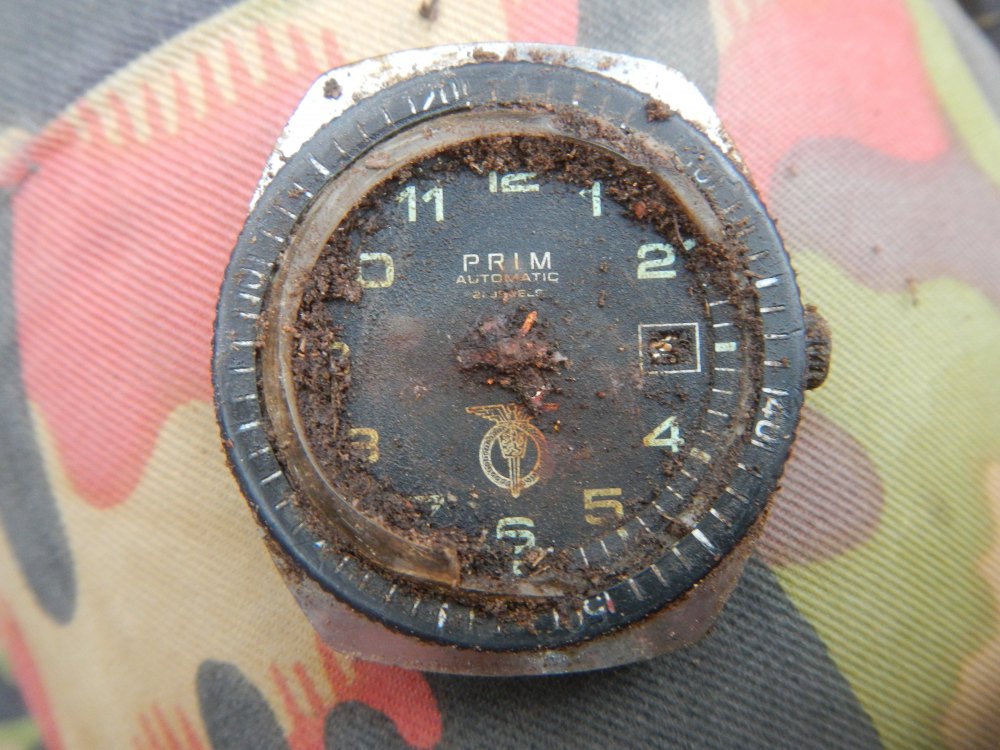 The watch, as found. 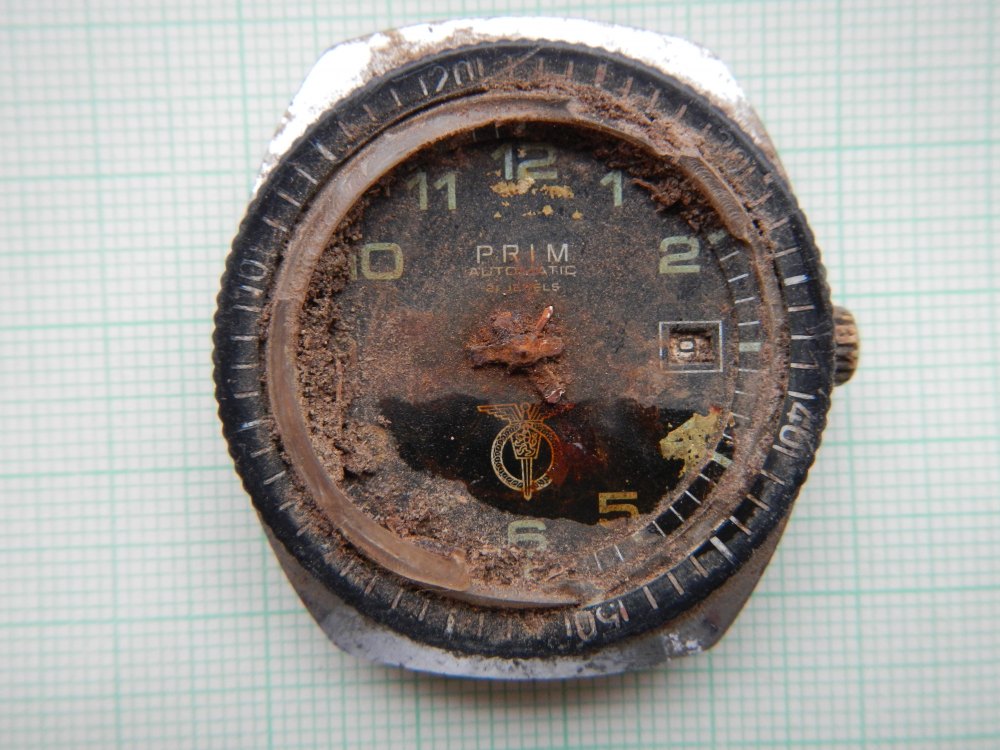 Time stopped at the exact time of the crash. 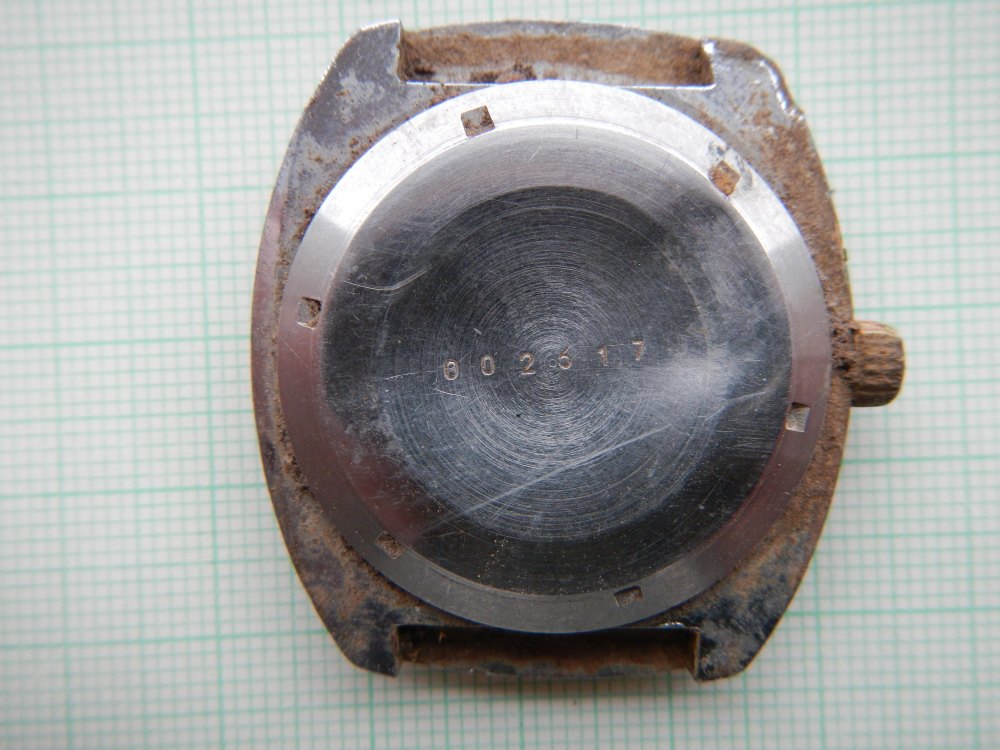 The identification number of the watch